Throughout the industry there are hundreds of patterns and signals developed by researchers to support trading with technical analysis. Technical analysts have also developed many types of trading systems that help them predict and trade price movements. Some indicators focus primarily on identifying current market trends, including support and resistance ranges, while others focus on determining the strength of a trend and the likelihood of its continuation. Frequently used technical indicators and chart patterns are trend lines, channels, moving averages and momentum indicators.

Charts visualize the support and resistance values. You can define these virtual lines for yourself when viewing the chart. Often support and resistance result from the failed attempt of the price to exceed a certain level. Resistance is a price level that does not seem to exceed the underlying (e.g. share, EURUSD, Dax). In the case of support, the price does not manage to leave this zone downwards. The longer these values hold these zones, the more they stabilize for a possible breakout or reset. Breakouts occur when the support or resistance is finally breached. Such breakouts are often characterized by an impulse movement, but beware, there are also so-called fakeouts, i.e. only the attempt to leave the support or resistance zone to return to the zone a little later.

A breakout is a strong price movement that exceeds a defined resistance level and maintains higher prices until the next resistance level is formed. Breakouts are usually accompanied by a volume increase that indicates a motivated buying demand that exceeds existing supply as prices rise. And vice versa in the case of downward outbursts.  Breakouts are often the start of trends or longer-term movements.

Trend Channels are very useful tools in the trading world because the right analysis can help you determine where your entry or exit point of a position should be. Although regular trend lines can indicate the direction of price movement, trend channels provide a clear indication of where the currency is trading against the overall trend and direction at this point. 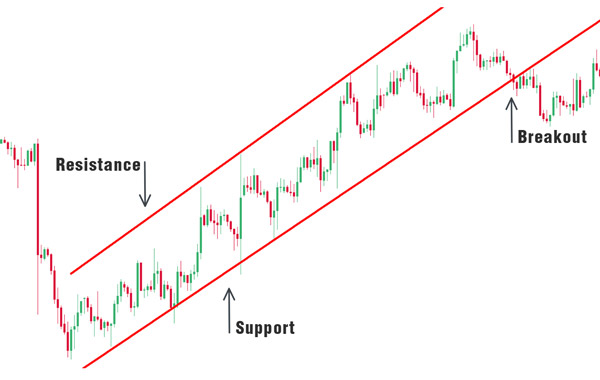 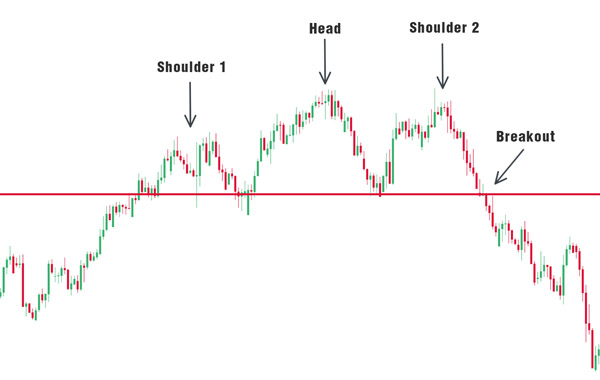 The head and shoulder pattern forms when the price of an underlying (e.g. stock or DAX index) increases: rises to a high and then falls back to the basis of the previous upward movement. Then the price rises above the former peak to form the head and then sinks back to the original base. Then the price finally rises again, but to the level of the first, initial high of the formation (shoulder), before falling back to the neck line again. Also tradable is an inverse shoulder-head-shoulder formation.

A double top is a reverse reversal pattern typically found in bar, line and candle charts. As the name suggests, the pattern consists of two consecutive highs that are approximately the same, with a moderate price drop in between. Note that a double top on a bar or line chart is completely different from a double top on a P&F chart. Double tops on P&F charts are bullish patterns that mark a breakout of upward resistance.

Although there may be variations, a double top marks at least an intermediate, if not a long-term change in the trend from bullish to bearish. On the way up, many potential double tops can form, but a broken support is not broken, a reversal cannot be confirmed.

Main trend:
For each reversal pattern, there must be an existing trend towards reversal. In the case of the double top, there should be a clear upward trend.

First high:
The first high should mark the highest point of the current trend. Thus, the first `summit` is quite normal and the uptrend is not endangered (or questioned) at this point.

Recovery:
After the first high there is a decline, typically between 10 and 20% of the high. The volume of decline from the first high is usually insignificant.

Decline from high:
The subsequent decline from the second high should result in a volume expansion and/or an accelerated decline, which may be associated with one or two gaps. Such a decline shows that demand is weaker than supply and a support test is imminent.

Break support:
Even after the downward trade for support, the double top reversal and trend reversal are not yet complete. Breaking support from the lowest point between peaks finally completes the Double Top reversal. This should also be done with a volume increase and/or an accelerated price decline.

Support becomes resistance:
A broken support becomes a potential resistance and there is sometimes a test of this new resistance with a price rally. Such a test can offer a second chance to close a position or to short trade. 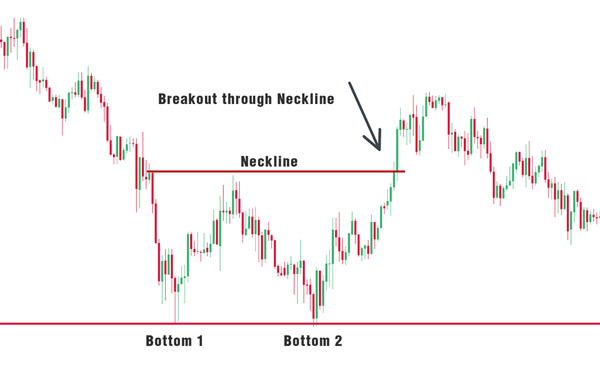 While the formation of the Double Top may seem simple, technicians should take appropriate steps to avoid misleading Double Top reversals. If the highs are too close to each other, they could only be a normal resistance and not a permanent change in supply and demand. The trough between the highs should be at least 10% lower. A drop of less than 10% may not be an indication of a significant increase in selling pressure.

Perhaps the most important aspect of a double top reversal is to avoid trading too fast. You should wait until the support is convincingly broken, usually with a volume expansion. A price or time filter can be used to distinguish between valid and false support breaks.

For a double bottom, everything is vice versa.

Similarly, like rectangles, pennants are so-called continuation-patterns, that are formed after strong movements. After a large up or down movement, buyers or sellers usually pause to catch their breath before leading the pair further in the same direction. 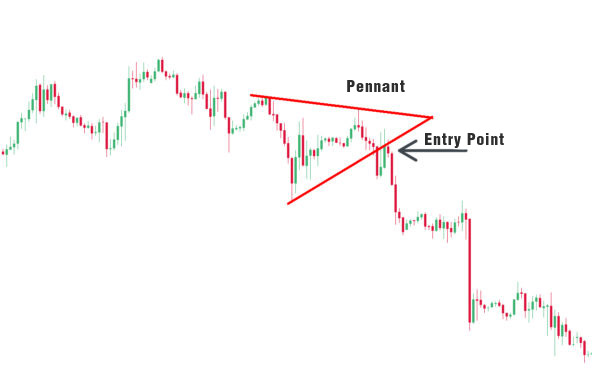 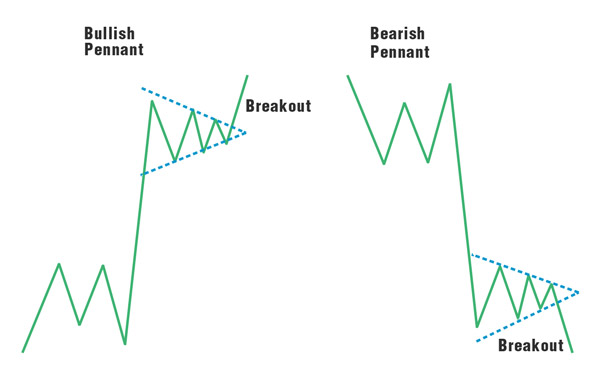 Bullish Pennant: Just like the name says, it signals that the bulls are about to recharge. This means that after this short period of consolidation, the sharp rise in prices would resume if the bulls were to gather enough energy to drive the price up again. In this example, the price made a strong vertical rise before taking a breather. As we predicted, the price moved strongly upwards again after the breakout. To trade this signal, one can place the entry above the pennant and the stop below the support line of the pennant to avoid false breakouts.

A flag is a technical chart pattern that looks like a flag on a flagpole and describes a continuation of the current trend. Flags are areas of tight consolidation after a strong price movement and typically consist of five to 20 candles. The underside of the flag should not be lower than the center of the flagpole that preceded it. Similarly, “pennant” formations are usually treated like flag formations because they are very similar in appearance, tend to appear in the same place in an existing trend, and have the same volume and measurement criteria. 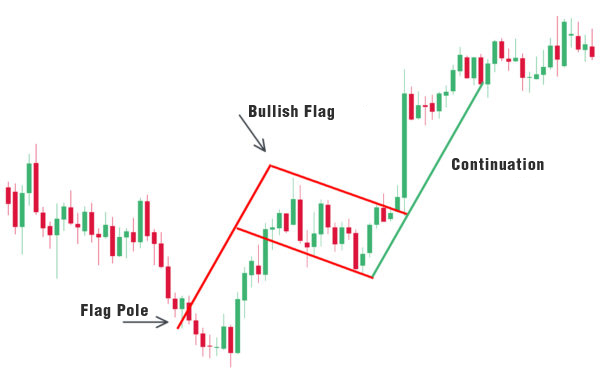 Flags and pennants are among the most reliable continuation patterns used by dealers. The only difference between the two patterns is that a flag resembles a parallelogram (or rectangle) marked by two parallel trend lines that tend to face the dominant trend. However, the pennant is marked by two converging trend lines and more horizontally, resembling a small symmetrical triangle. It is important that they are both characterized by a decreasing trading volume, and although they are different, the trading idea is the same for both patterns, as shown in the figure above. 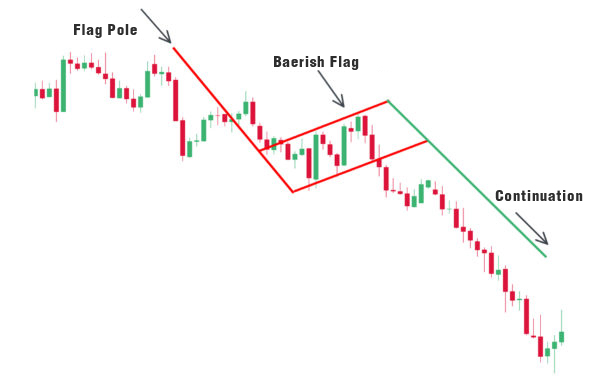 A 1-2-3 formation is a familiar chart pattern that appears regularly in most liquid markets. Unlike other patterns such as a triangle or SKS formation, which are subjective and easy to recognize, a 1-2-3 formation can be precisely defined by an objective set of rules. A 1-2-3 high is formed at the end of an ascending market. Typically, starting from point 1, prices reach a high at point 2, correcting downwards to point 3, where a renewed upward movement begins. The impulse or breakthrough is expected when the price exceeds the high of point 2. 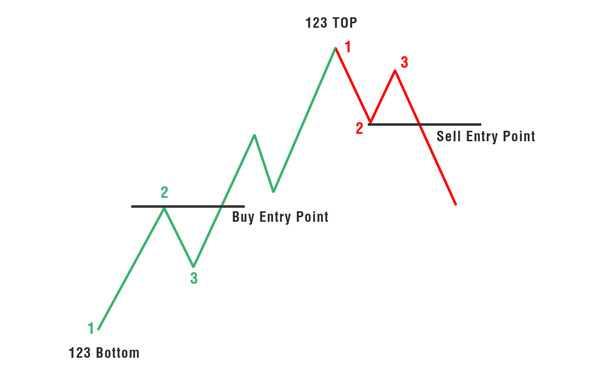 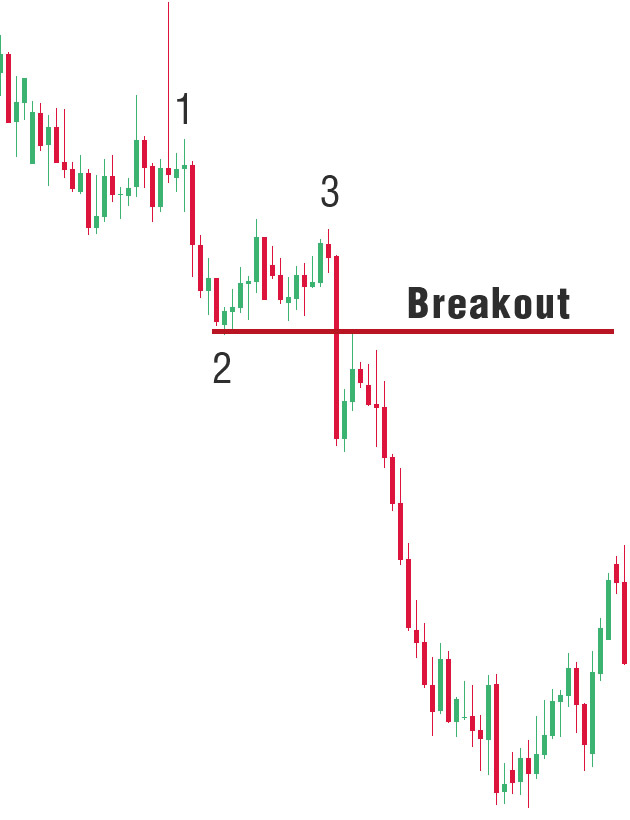 At the end of a descending market, a 1-2-3 low is formed. Typically, prices in a downward movement from point 1 will reach a new low at point 2. At point 2, an upward correction takes place before the price makes another downward movement. The impulse or breakthrough occurs when the new movement falls below point 2. The entire 1-2-3 high is cancelled if a candle moves so strongly after point 2 and thereby falls below the initial level of point 1. At the 1-2-3 low vice versa. The shorter the correction, the stronger the breakthrough in the prevailing price movement. 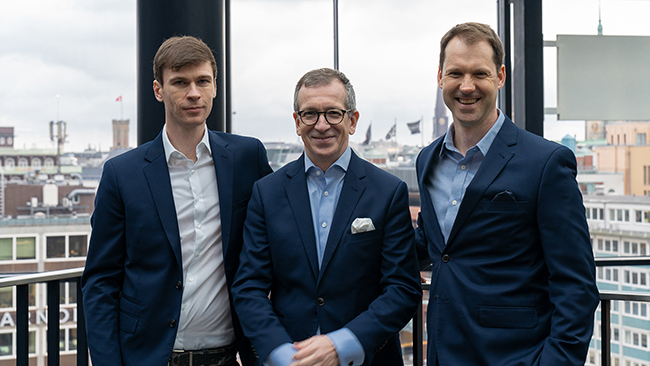 Available on all trading days from 8.25am to 6pm CEST. 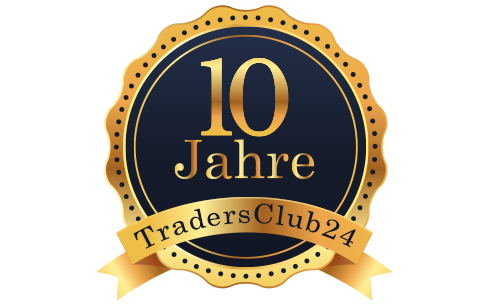 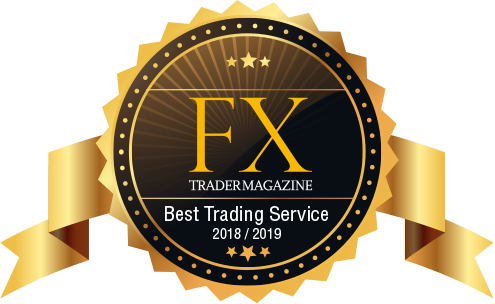 
Risk Warning: Trading Foreign Exchange and Contracts for Difference (CFDs) is highly speculative and may not be suitable for all investors. The leverage created by trading on margin can work against you as well as for you. Only invest with money you can afford to lose and ensure that you fully understand the risks involved. You should also precisely inform yourself about all the risks associated with trading currencies and in case of doubt, consult an independent financial consultant.